The store will not work correctly in the case when cookies are disabled.

We use cookies and similar technologies on our website. Cookies are used for ads personalisation and by using the site you are consenting to them. You can manage your cookie settings via your browser setting at any time. To learn more about how we use cookies.

The history of Pfaff extends over 150 years

Pfaff's history all started with a chap named Georg Michael Pfaff. He was a craftsmen who made musical instruments. He lived in Kaiserslautern, Germany at the start of the industrial revolution.

In 1862, Mr G M Pfaff, whilst experimenting, made his first sewing machine. And that very machine can still be seen today at the Munich Museum of Science and Technology.

But he did of course realize the great prospects of his product which paved the way for a company that would set the standard for some of the most advanced sewing engineering the world had ever seen. A company, still today, internationally recognized as the household name for quality and technical progress in sewing.

Georg Michael Pfaff’s second son, he discovered that the German sewing machine industry got its machine equipment from the USA. Georg Pfaff Senior decided that his son also named Georg should pay a visit to America, which he did on July 12th 1876 arriving in New York and then Philadelphia on July 15th, where he went on to visit the World Industrial Exhibition.

During his sons two year stay in the US, Georg Pfaff studied manufacturing plants, tool factories and ordered tools, drilling machines and universal lathes for the PFAFF factory in Germany and it did not take long before Georg Michael Pfaff completely abandoned individual manual production for steam-driven drilling, milling and planing machines.

Georg Michael Pfaff opened a sewing machine shop in London in 1885 and from there the PFAFF factory continued to modernise and extend itself producing one of the world’s most aspirational brands of sewing machine.

A huge story condensed here into a few milestones have been passed along the way. Sewing today is a true hobby for people of all ages and skill levels, just ask any quilter, embroiderer, or dressmaker how much it means to him or her. Over the years PFAFF has transformed sewing from a chore to a creative hobby. 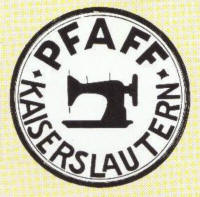 First beginnings in Germany in 1902

In 1872, ten years after the company was founded, a thousand sewing machines had been manufactured. In 1902 Pfaff opened a new factory in Kaiserslautern, Germany and the production rate increased significantly, in 1910 Pfaff proudly produced their first million sewing machines.

A early example of the year 1920, a few years before Pfaff introduced their first rotary hook mechanism, this boat shuttle type machine had a model number of 11, it was made from cast Iron and was heavy. It was know as the Pfaff 11..! 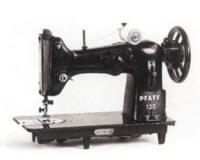 In 1922 Pfaff launched their first Rotary Hook sewing machines. The year 1932 saw yet another milestone, launching the famous Pfaff 130, a high-performance zigzag machine to meet the ever-increasing demands on the market. After the Second World War the company continued to expand taking over the Gritzner-Kayser brand in 1957. 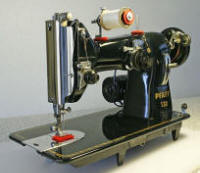 During 1950-1951, the first light weight aluminum household sewing machines were introduced. Then, in 1954, the five millionth Pfaff sewing machine was manufactured, it may have been exactly like this model 130. 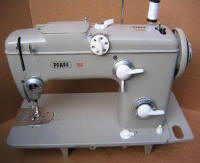 Pfaff were so proud of the 260 model, it had 80 automatic stitches and was super heavy industrial strength, it was advertised with a warranty of 10 years. Belt driven by string.! in fact 10 strands clamped together with over 100 metal cleats. Later it was superseded by the 262, 360 then 368 models. 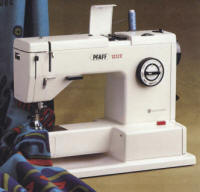 1968 saw perhaps one of the biggest milestones in Pfaff's history, the launch of the Pfaff 1222, featuring the original IDF for integrated dual feed, as well as electronic needle piercing power controlled by a small black box of electronic trickery. This model also had a seam tie-off function to automatically reverse a few stitches at the press of a lever. 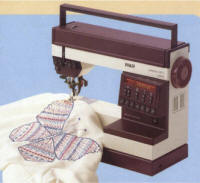 In the year 1979 was revolutionary for the Pfaff. The comprehensive development of a totally new sewing machine began and would forever enhance sewers creativity. This machine came to be called Creative 1471 and was introduced to consumers in 1983, later is was superseded by numerous other models based around the chassis, but with even more advanced computer power. This model was fully programmable, i.e. the user can program her own fancy patterns in a very simple way. It was a genuine newcomer in the sewing world, not only in Europe but also in the USA. 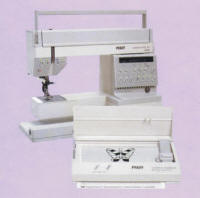 1988 saw the release of our first machine with 9 mm wide stitches the model was 1475. A feature allowing the sewer to create and copy stitches using a unique add-on unit called the Creative Designer. It was predecessor to an embroidery unit.

The first machine with Maxi Stitches up to 40 mm wide. 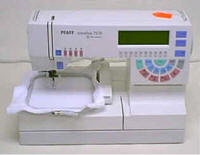 With the advert of the newly released 7500 series was Pfaff first hoop-style embroidery machine, it was the 7560, and the more advance 7570 soon after, both had 9 mm stitch plate and multi-directional feed capability. The fabric could be fed not only front to back but also in any of eight directions. This was made possible by the invention of stepping motors that moved the feed dogs in all different directions. 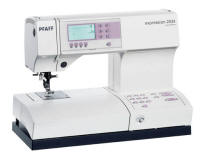 Shortly after the 7500 series of the 1990,s came the 2000 series, this Pfaff model 2034 was near the top of the 2000 range. A little more rounded buy still with dual feed, now called IDT (Integrated Dual Transportation) instead of IDF (Integrated Dual Feed) for the 1400 series.

In 2011 Pfaff launched a super advanced top-of-the-line computerised sewing machine, the Creative Sensation, both for quilting, dressmaking and embroidery. First of the large colour touch screen models. The longer sewing bed was designed for quilt making from the start. 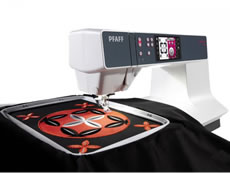 Was the year when Pfaff launched many new embroidery models offering the option to even buy a regular sewing machine, then later when the time was right for the user, add an embroidery unit. All the new creative models (2.0, 3.0, 4.5, 5.0) used the latest computerised functions and had longer sewing bed with detachable embroidery unit. 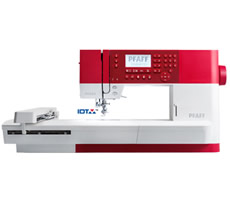 Features you cant live without

Even more Creative embroidery models were added to the range. This model is what dealers have been asking for for some time. The Creative 1.5 was bright in colour, and small in size compared to others. A compact full featured embroidery machine at a budget price, yet it offered over 150 stitches, LCD screen, USB slot and 24 cm embroidery area. Winner of the IF Design Award 2016. What more would you want.

And even after 150 years of unparalleled sewing history, we assure you, the best is yet to come.

Compare Products
Compare
Clear All
You have no items to compare. 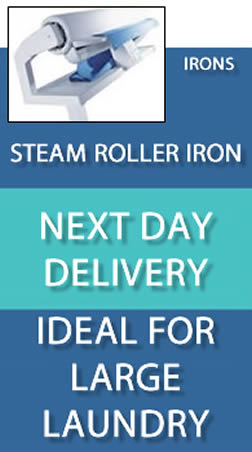 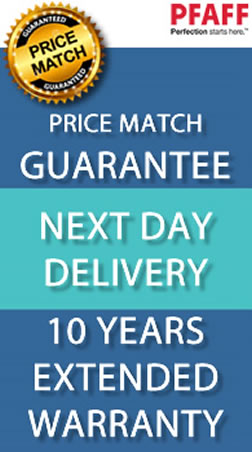